Natasha Watts has made a name for herself as a go-to vocalist in dance and soul circles. But, considering her tenacious credits to date and the talent she exhibits, it’s astonishing that only now she has been offered the chance to blossom as a solo act with the arrival of her self-titled debut album.Natasha’s voice, soft and reassuring yet capable of the bellowing power of Shirley Bassey, is the centre piece of an album that aims to enthral. If not rhythmically, then through its honestly.This debut LP is a carefully considered arrangement from an artist whose voice is flushed with experience. Growing up with a DJ father, Natasha describes her home life as being “surrounded by all genres of music”, with Whitney Houston and Donny Hathaway among her favourites. After discovering her gift at the age of 16, the British-born singer was soon whisked off to the US to hone her new-found skill. That excursion soon turned into an extended stay, and eventually led to the birth of her first child – something the singer says would not have happened if she’d taken a different path and signed to Columbia at 18. Music would have to wait.When Natasha returned to music in 2006, there was to no fast-track to stardom. She was lead vocalist for UK soul group Funkshone for a brief time, before deciding that a solo career was what her heart desired. If Funkshone was her warm-up, Natasha’s recent past – spent collaborating with house DJs and producers, such as Ric Atari and German production duo Cool Million – has been aerobics for her voice box. Both have impacted her debut record, which teases Natasha’s vocal ability without betraying its course with whistle-stop genre-ticking.Natasha channels devotion (‘Good Love’) and conviction (‘Worth’) by the bucketful. “Oh, I think I need a change” she cries, holding the last note with a soprano worthy of Beverley Knight. It’s a powerful moment that arrives early on and sets up what is, perhaps, the album’s strongest recurring theme. You hear it again on ‘Skyward’ (“For five long years we had it all / but now a change is on its way”), which is quick to charm with its disco-style rhythm and occasional turntable scratches.Those scratches are one of the few newish touches on a soul record that keeps things strictly traditional for the most part. Still, what producers Frank Ryle and Rob Hardt occasionally lack in flare, they make up for with backing tracks that give Natasha’s tender tones the space they deserve. Take ‘Stars’, a stand out slice of neo-soul, or ‘Tonite’ with its super-funky, bass-led beat and angelic vocal. Both sound tight enough to make Estelle wish she’d got there first.In Natasha’s voice, you can hear a kind of maturity that only develops when an artist has been around the circuit, and endured hardships that come from gaining experience the old-fashioned way. She demonstrates a tinge of her R&B and soul compares, but she sure isn’t trying to be them. And that’s what’s most telling about this album. It feels content, wholesome and comforting – just like the singer herself.Natasha Watts is released on February 14 on SedSoul Records. Get yourself a copy here.By Aaron Lee (@dk33per) 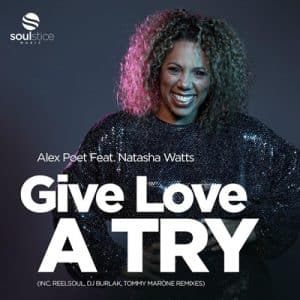